Web applications and services serve numerous requests from app users ceaselessly. That is why they need to be efficient and performing under different circumstances. Load developers should check the behavior and performance of apps and services through load and stress testing. There are lots of web testing tools available that assist with conducting, building, and analyzing load tests. Locust is simply one of them. Locust.io tests the performance and exposes how a system can handle many concurrent users. This lightweight, distributed, and scalable framework allows testers to stipulate loading scenarios by Python code. It also and supports distributed loading. Read here more on why Locust load testing makes a huge difference in getting the best out of system, web, and app testing efforts.

When it comes to defining user behavior in code, Locust makes a big difference as it simply needs plain code, not clunky UIs or bloated XML. Locust backs running load tests scattered over many machines as it is scalable. The best part of using the tools is that it can simulate simultaneous users in a large number. This open-source framework based on Python lets testers detect the number of concurrent users handled by a system by writing test scenarios in Python code. The best part of this framework is that you can use it for websites, web apps, and web-based services. It quickly finds server issues such as memory leaks and resource exhaustion. Among the prime benefits of Locust are:

Developers and testers define the behavior of each test user (Locust). When a large number of users come to any web app, you needn’t go for clunky UIs or overstuffed XML. Simply Python codes are used in writing Locust scripts. So, they easily track the differences between histories.

Locust.io uses the async approach, and it is completely event-based. That is why it supports running numerous load tests on single or multiple devices. The tool simulates millions of concurrent users as it uses gevent in place of callbacks. It means that every Locust runs inside the greenlet (process). It is known that test users, irrespective of numbers, act independently with their session data. Moreover, each Locust node handles thousands of users through defined tasks in a single process. The framework allows test runs with a few configuration adjustments.

Locust has a web-based user interface to display real-time test data. It is capable of measuring various requests like total requests, request/second, and failed requests. Users easily start/stop tests using the tool that has a cross-platform UI and is easily extendable. For single-run mode, Locust offers command line support. It also controls the framework via HTTP request in the master-slave mode.

Locust.io is very hackable, and one can add specific functionality using it. The load testing tool is also extensive with a seamless integration feature. Testers can make this tool highly customizable using JavaScript and Python. Interestingly, it can test almost any system with a written client. If you plan to make the most out of your system, software, or app, testing expert companies having Python skills can give you an edge.

When It is Right to go with Python Locust

Locust is a superb performance and load testing tool. Many testing frameworks promise perfect results. People generally ask why they should go for Python locust for better outcomes. Broadly, testers may go ahead with Locust if they like Python, have strong expertise with Python, prefer coding over UI tests creation. 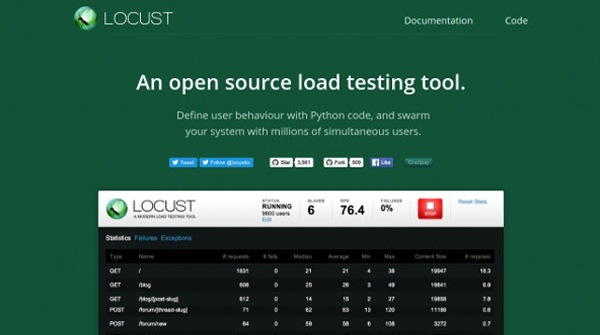 If testers are not experienced in performance tests creation, they can go with JMeter UI. Locust delivers testers documentation and code examples so that testers can implement the required load script concerning Python expertise. Locust load testing is highly beneficial for testers as it is easy to maintain and organize performance tests for varied environments. Using Locust and Python experience, testers can:

You can ask your testing teams about their Locust load testing expertise. It will help you get faster and assured testing outcomes.